For my Developmental Drawing class I was required in the first instance to research the drawing styles of 3 different artists, designers and architects. I picked the work of Egon Schiele, Alvar Aalto and Zaha Hadid.

Egon Schiele was an Austrian major figure painter in the early 20th century. He was noted for his intensity & sexuality. He was influenced by Kokoschka, Klimt and Art Nouveau. His expressive style makes him an early exponent of Expressionism. His work grew progressively more complex as he developed his own style, during the war his paintings became bigger and more detailed. Although earlier in his painting career his main subject had been nudes, children, military figures from his time in the war, towards the end of his career his main subjects were more natural and architectural.

I picked Schiele as I admired his loose sketch work. I liked the versatility of his work, he drew many different subjects using a variety of different mediums such as pen, paint and charcoal. This can be clearly seen in his work where he has done sketches of his home town Kramua using paint to bring out the strong colourful aspects of the buildings there. Here are some examples of Schiele’s work.

Alvar Aalto was a Finnish architect and designer and also a sculptor & painter. His work includes furniture, architecture, textiles, glassware etc. In the first half of the 20th century, his work runs along industrialisation of Finland. His career spans from 1920s – 70s & ranges from different styles such as nordic classicism, rational international style modernism to a more organic modernist.

Aalto’s drawings are very neat and precise and often focused in on particular detailed areas. His detailed measured pencil outline sketches are quite different from that of Schiele’s loose style and often lacking colour although in the Finnish pavilion drawing some hints of colour have been shaded in with what looks like coloured pencil. Again some hints of colour in his other drawings but I like the way the colour is only subtle and doesn’t take over the whole drawing.

Zaha Hadid is an Iraqi-British architect who became the first woman to win the Pritzker Architecture prize in 2004. Her buildings are described as distinctively neo-futuristic with their multiple perspective points, elongated structures and curving forms. She grew up in Baghdad’s first Bauhaus inspired building which probably had a great influence on her later work.

I liked Hadid’s detailed pencil drawings below. I like the range of tone she uses, it gives it a great deal of depth and also like the fact they are very futuristic looking. Below is an example of one of her looser architectural sketches and above I love her more abstract style drawings which is supposed to evoke the chaos of everyday life.

You can see more examples of these artist’s work here. 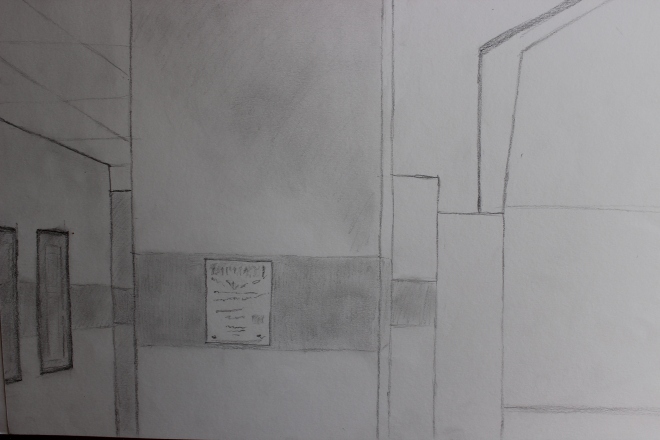 We also went on a trip to the McManus Galleries museum in Dundee town centre to do some quick sketch work. Here are 3 drawings I did while on the trip.

I then continued to develop my sketch work by doing drawings using different mediums of my surrounding area in Dundee. I tried to to spend a maximum of 30 minutes on each sketch in order to develop my quick drawing skills. 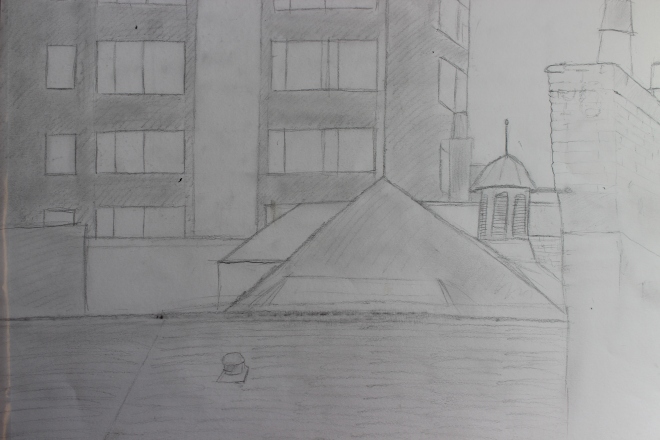 For the next stage of the project I was required to create a storyboard that represented the theme of ‘Journey’. For my first storyboard I did my morning journey. As you can see below, the first picture shows peering out the bed covers at the alarm clock, having a shower, having breakfast/preparing a packed lunch and doing the nursery run. I could use different drawing mediums to better represent these different stages of my morning journey.

Instead of doing my morning journey I could do my journey home so I drew up a storyboard for this too. Leaving the college, the bus journey, walking down the road from nursery and cooking dinner when I got home.

A JOURNEY THROUGH GRIEF

In the end I decided to a metaphorical journey through the 5 stages of grief being that it was something that particularly resonated with me at the time. I used the most well-known models of “The 5 Stages of Grief,” originally developed by the late Elizabeth Kubler-Ross. These stages include;

For this stage I did a black and white drawing of a solitary figure standing at the end of a darkened tunnel. The figure is a silhouette against the bright light beyond, bordered by the darkness of the tunnel and surrounded by harsh lines and angles all to convey the isolation of the figure. I kept the sketch monochromatic and used acrylics, black ink and pencils for the detail. 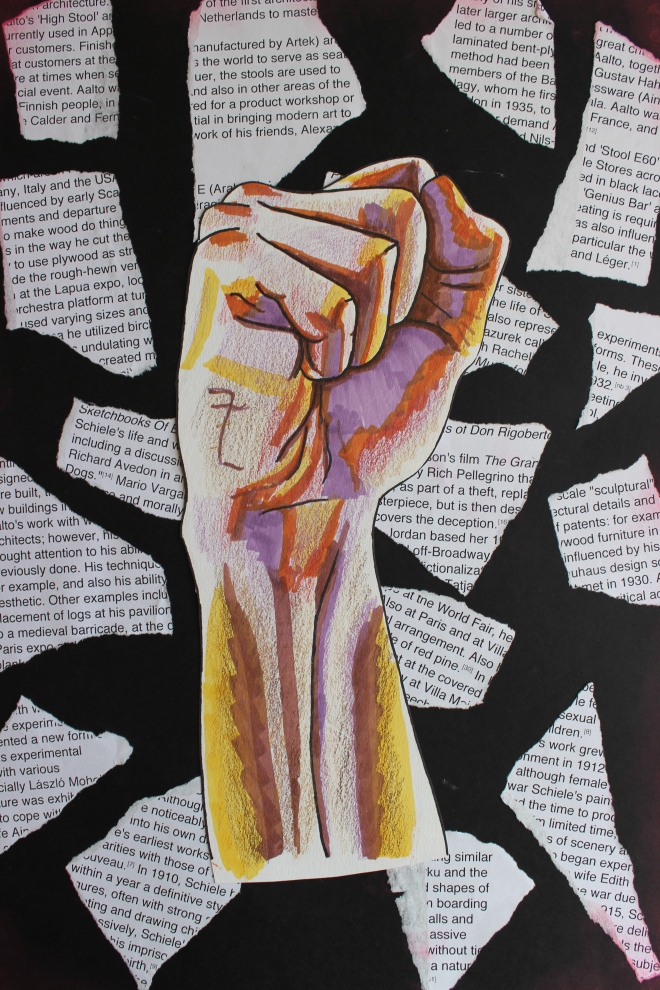 For Anger I drew a picture of a clenched fist coloured in with bold ink pen. I used a black coloured card background to contrast the fist against with ripped up ‘shards’ of writing to convey the split mind. I bordered the outside of the drawing with red pastel to represent ‘red mist’.

The bargaining stage is often associated with religious contexts; pleading with God to give our loved one back or reliving the past. That’s why I decided to do a loose sketch looking up to the Nethergate Church Steeple, an old religious building in the centre of Dundee. I kept the drawing sketchy and pale with a little colour using coloured pencils and pen to bring out some aspects of detail.

This is the stage of grief where we experience the sadness and mourning and can last a long time. I did a drawing of a figure hunched over crying and used scrunched up tissue paper and water colours in different shades of blue to help convey the sadness.

I wanted to tie my final drawing in with my first one to complete the cycle so I decided to do a silhouette drawing again using the same figure. This time he is swinging a child around at the park at sunset (or it could be sunrise), this is supposed to convey hope in the future. I did this drawing using black ink but this time I’ve also added some colour using pastels to make the drawing brighter and more cheerful.