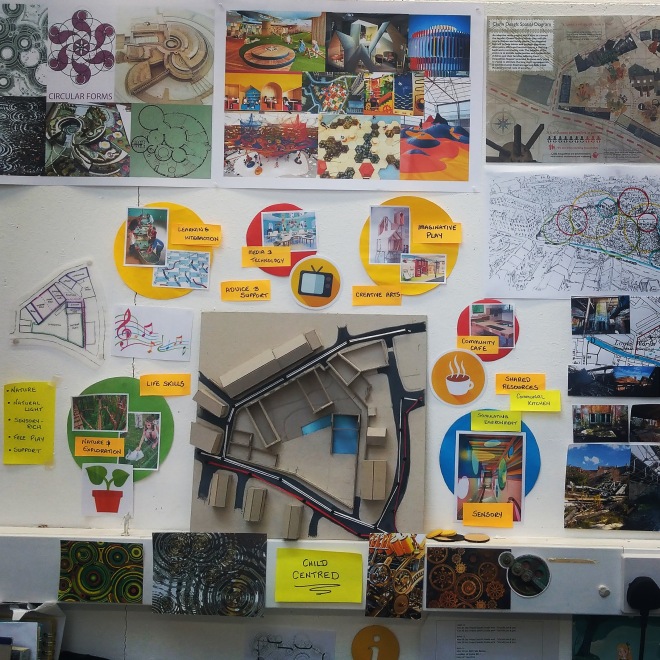 Having done quite a bit of work during my research and site analysis stages I had a pretty good idea of what buildings I was going to preserve and what needed to be included in my new design. I made up a proposed spatial diagram of the site and considered how I was going to redevelop it into a contemporary family centre that still retained many of it’s historic features. Some of the initial proposed areas I wanted to include within the site were a community cafe area, indoor and outdoor play areas, a creative arts area and a clothing bank. I felt these zones would address a lot of the requirements that I had discovered during my research process.

When I started my initial design development phase I considered all of the influences I had looked at so far. I found a common theme that kept coming up was the cogs and gears of the industrial machinery used during the jute production of the building and again in my emotive model I had based on Bronfenbrenner’s ecological systems theory. Using some site plans and tracing out the solar path I started to make layout and zoning experiments using interconnected circles around a central hub. I was quite keen on having a multi-use central hub or “village centre” with all the other departments branching off and easily accessible. After several experiments I realised that these circular patterns were not working tying the design into the original angular structure of the buildings and site plan
and so I went back to the drawing board. However, it wasn’t a complete waste of time as I would come back to these circular patterns later on in the design process.

Next I tried out some more angular experimentation which tied in with the zig-zag patterned gable ends of the old spinning factory at the northern perimeter wall of the site. After several different origami experiments I then went on to try these out using sketch modelling with metallic card. I found these zig-zagging reflective patterns also represented the waves of the Lade and had an effective forest floor pattern as the light patterns were cast throughout the course of the day. This led me onto the final roof design which tied in with the original shape of the high mill building but gave it a much more contemporary edge. I considered how I could tie this in with my earlier experimentation with the copper patina replacing the gold card.

This origami experimentation helped me on my way toward my final building design but there was still some smaller details to finalise before moving onto the interior of the building. The main issue was designing a new contemporary entrance way that tied in both of the buildings together that sat at odd angles to each other. Unfortunately it was at this point that the University had to go into lock down due to the COVID-19 outbreak and things were about to get a lot more challenging.