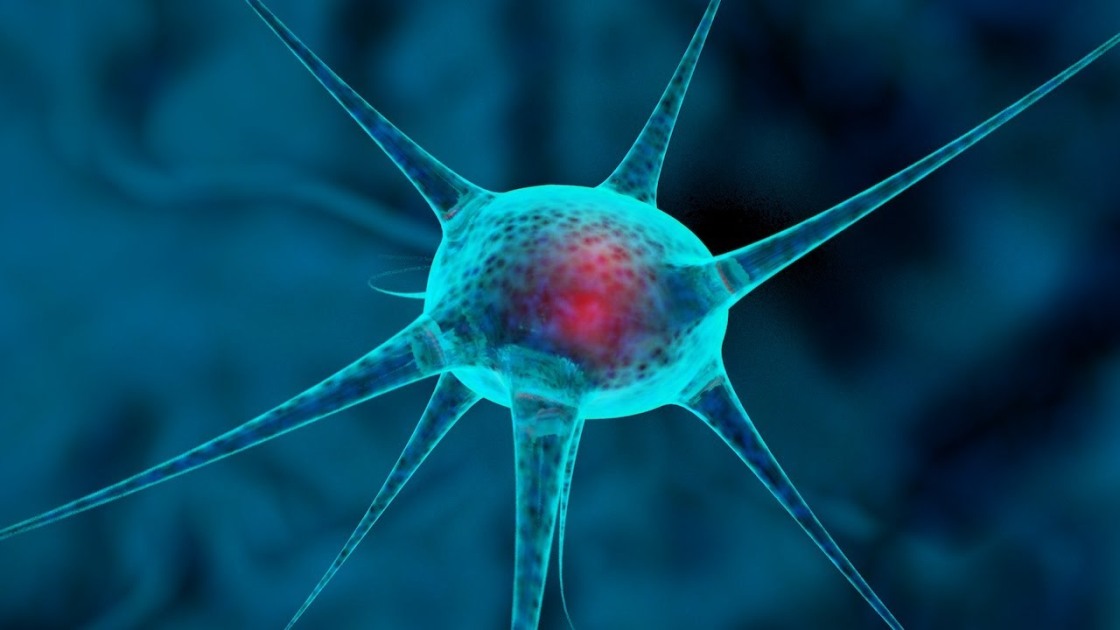 In traditional open-plan offices there is a tendency to view workers as automatons which is dehuminising and can stifle creativity. Modern office environments have become sterile and unimaginative. There is an awareness of the need for change but there is a fear of being radical but why cant a working environment be exciting? This Future Workplace project aims to remedy that and provide an industry setting that is both lively and inspiring.

Initially we were put into groups where we had to produce a video based on research . Our theme was Open office vs Open Source. We discovered that although there are advantages to open plan offices there are also many disadvantages too. The traditional open plan offices have become outdated in today’s climates with it’s changed social attitudes and new technologies. There is a need for more personalisation, workers need to be treated as individuals. One person’s ideal working environment could be another person’s nightmare. People also have different work schedules and lifestyles and a greater flexibility is required to allow for this. You can see the video we made here;

I did an interview with a local call centre worker who had gone from previously hating his work to actually enjoying and I was curious as to what had caused this change and if he had any tips for my own office design. He told me that before he had worked on the main call centre floor with about 300 other employees that were all total strangers to him; 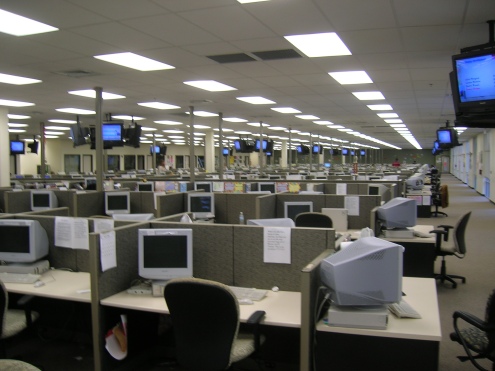 “It was like being a robot working in a noisy factory full of constant distractions and interruptions. I was going to leave until I got promoted and moved to a different department. I now work in a smaller team of about 20 people, it is a much more pleasant, friendlier atmosphere.”

He told me that the most frustrating thing about his work was before he had no control over his environment. The thing he liked most is that his work had a sanctuary room where you could go to de-stress, I thought this might be good idea to take on board for my own design. He also mentioned that he thought it was important to have a private sound proof board room for confidential meetings. 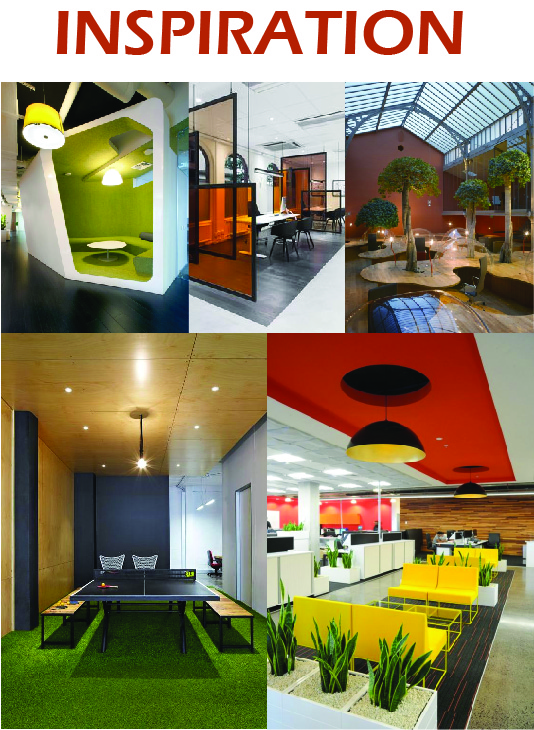 I took some inspiration from the above images. It would be good to have small enclosed spaces for privacy and small group work areas. Large organic shaped tables for collaborative group work. If I am to keep the open plan office area I could do something creative such as colourful glass partitions to cordon desks apart. A dining set that converted to a ping pong table would be ideal for a break room and added flashes of bright colours against a neutral background could be effective at adding some interest to an otherwise sterile environment. 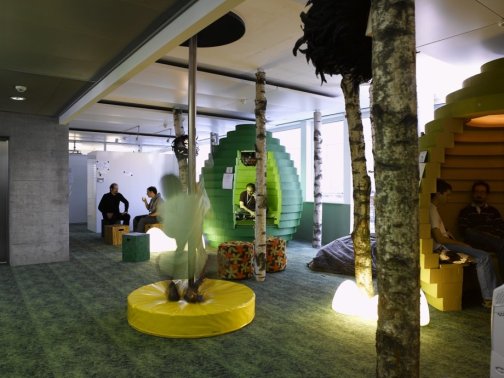 I looked at the Google Office in Zurich as it had been voted one of the best places to work in the world and I wanted to know why this was. It has functional work spaces combined with playful touches such as gondolas to have private meetings in and themed rooms such as jungle rooms to relax in. These strong visuals and entertaining qualities were designed to promote creativity, innovation and collaboration. I thought it would be good to take a leaf out of their book and include some elements of fun in my own design. 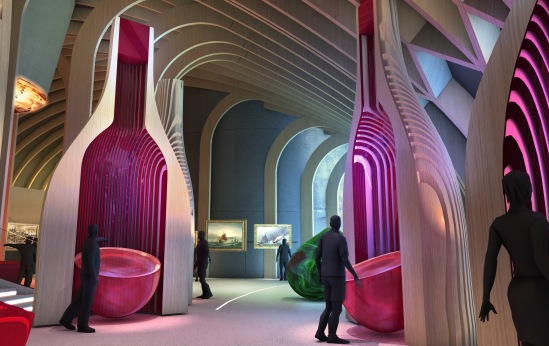 I had decided to do a future workplace for an Exhibition Design Company so I wanted to design something that actually communicated what it was, something that was both theatrical and exciting. Exhibition Design is basically storytelling to desired audiences, that promotes user engagement to all so therefore needs to be universal. There is the need to collaborate with other companies and promote creativity, user participation and good communication. I therefore needed to think about how I would incorporate all of this into my design. I also wanted to include some elements of fun and playfulness into my design. 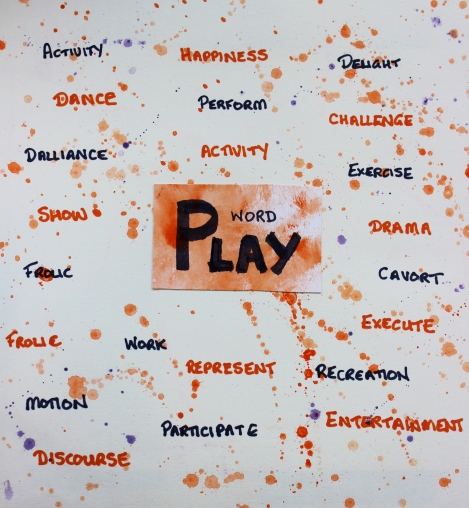 Taking on board this universal theme, I thought about how everyone has different requirements and prefer different environments in which to work productively, and even then our moods and impulses change constantly. Therefore I wanted to design a place that had something for everyone and catered for changing needs. This includes quiet working areas, a collaboration zone, a destressing sanctuary room and even sound proof privacy pods for those very private phone calls. As well as this there would need to be facilities such as a break room, kitchenette, reception, workshop, toilets and storage. 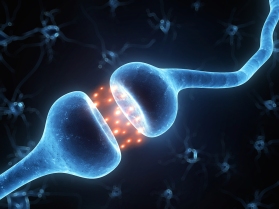 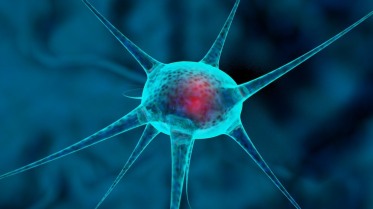 As I had been thinking about my office place as being like a ideas factory where creatives meet it led me on to thinking about using brain structures such as synapses and neurons as being my organic shapes that I could base my ideas on. 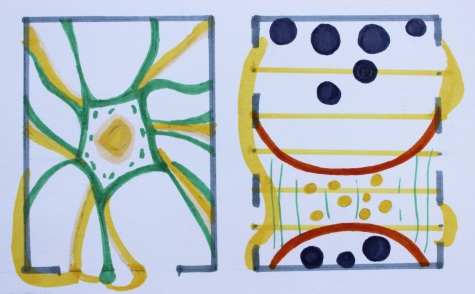